I came across an interesting scenario while working with PokerSnowie today. 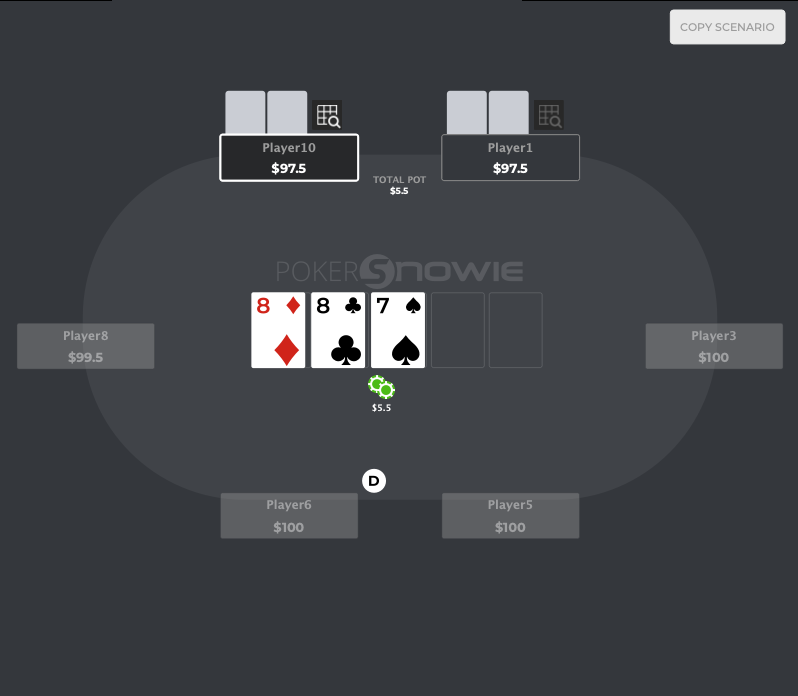 Here are the preflop charts from PS (these are approximate, and doesn’t differentiate between some mixed 3betting in the BB):

BB and LJ have about the same number of combos of the nuts in their range (actually, BB 3bets 88 every once and a while), and since BB’s range is larger than LJ’s range, 88 and 77 make up a larger proportion of LJ’s range than BB’s range.

However, BB also has a 98s-A8s, for an extra 12x trips, and 87s,97s,K7s,and A7s, for an extra 12x second pair. While this doesn’t give BB the equity advantage, it does mean that BB is connecting with this flop in relatively nutty ways that LJ can’t, and that means it might make sense to develop a donking range:

Hypothesis: Given that BB has a nuts advantage, BB will donk bet on this flop with 88, 77, some 8x, as well as some bluffs.

What hands will BB donk with?

PokerSnowie advocates that BB donk 1/2 pot about 7% of the time: 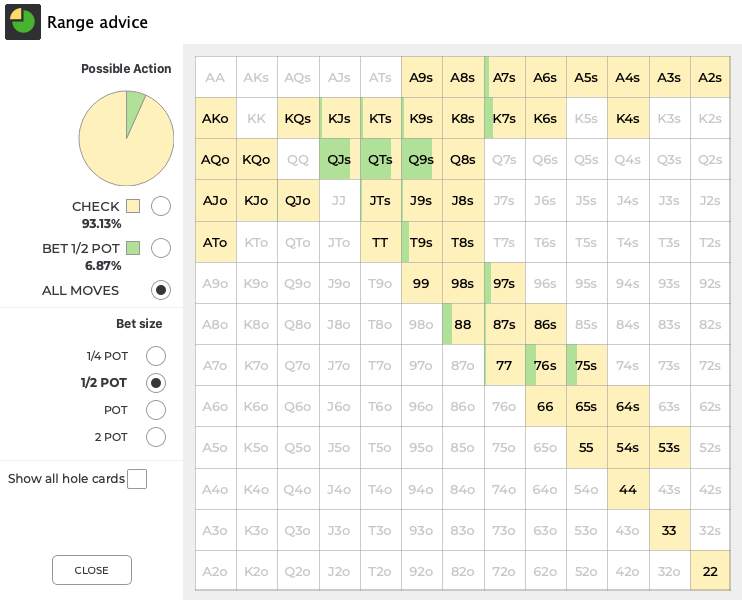 There are some surprising things here:

There are about 8.5 combos of the Qx bluffs and only 3-4 combos of ‘made hands’ (including a 7 or an 8). PS is betting 1/2 pot here, so I guess by combining fold equity along with potential to improve and getting paid when we have the nuts, this might make sense? But it’s really weird that we have more bluffs here than value bets.

Why donk with Qx?

Here are the possible reasons I can think of:

The Qx hands are all blocking over-pairs 99-QQ

First, all of these hands are BDFDs and can possibly make nut straights.

Hypothesis 2.0: On MMM paired flop (i.e., three medium cards from 6-9 with a pair) the BB has the nuts advantage and will donk bet on this flop with a small percentage of nutty made hands like 88, 77, and some weaker made hands, as well as around 1.5x-2x as many bluffs that (a) have good blocking potential, (b) benefit from folds, and (c) have a potential to improve.

I can test this on other flops to see if the pattern continues.

Question 2: What does LJ continue with here?

LJ has an equity advantage but not the nuts advantage. This is a relatively dynamic board: any 8x is clearly nutted and probably can bet to the river for value. However, a paired 7 is vulnerable. BB has some OESDs (65s, T9s) that probably won’t fold, but we still have good equity against those.

PokerSnowie suggests cbetting 1/2 pot with only 23% of hands: 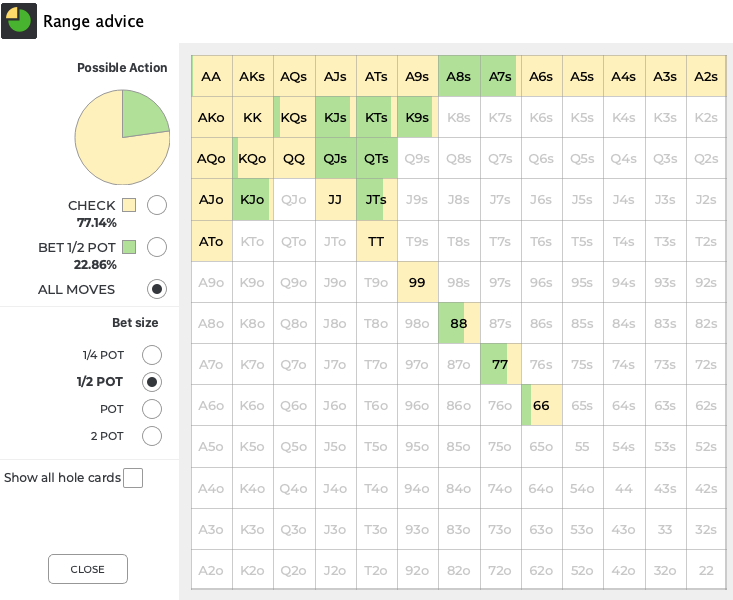 Lojack's CBetting range: The lojack continues with any 7 or 8, as well as most Qx and Kx holdings. Ax doesn't cbet, presumably because they aren't as vulnerable to an A on the turn/river

This is a polarized range. Overpairs and A-high don’t bet, but nutted hands like 88, 77, A8 and A7 continue.

Unfortunately I don’t have access to a solver, so all experiments will be by hand using PokerSnowie (i.e., I can’t script PioSOLVER).

To test my hypothesis I want to

To test this, I am going to investigate two of each of the following flop textures:

I will randomly generate the ranks (when there are more than two possible flops). The suits will be chosen by hand since they don’t matter.